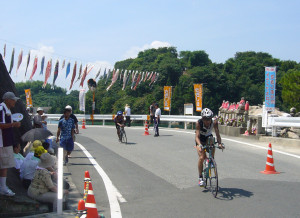 The triathlon is held every year on fourth Sunday of August, and most islanders of this island participate in the race as friendly volunteers for supporting all of the athletes.

In last year(2014), the entries were approximately 300 Japanese athletes, and several foreigners including guest athletes from New Zealand.

One week before race day, islanders stretch a rope with carp streamers across Mukouda bay.