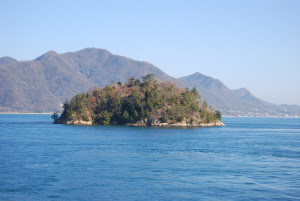 Sukunejima is approximately 500 m in circumference.

The Sukunejima remains are attracting attention to its historic value because stone implements of the Old Stone Age were excavated.

According to legend, Sukune Takenouchi saved young Emperor Oujin from succession race and hid him in this island during the Yamato dynasty.

This island is famous for the filming location of the movie, “Hadaka no Shima (1960) “, directed by Kaneto Shindo.